" . . . The state of his health worried him more than the condition of France. He was sixty-three and ill. He had taken as his mistress a young woman, Alison Dumay, the illegitimate daughter of a priest. He had had five children by her and was still infatuated  by her. Ill and, by the standards of that age, a very old man, he was tormented by the thought that if he died unreconciled with his wife he would go to hell and equally tormented at the prospect of putting aside his mistress. He was determined to get well and sp postpone the day when he would have to reform his life and repent his sins." (St. Joan of Arc)

"Baudicourt hesitated to assume the responsibility of any action in the matter. He took Jeanne to see the old Duke of Lorraine, his feudal superior. Ducke Charles, at that time under the domination of a mistress, Alison du May, of great with and beauty, was ill, and thought the miraculous maiden of Domremy might restore him to health and the arms of Alison. Jeanne, very wisely and frankly, told him to put away his paramour and take back his wife and lead a decent life. She was not worker of vulgar miracles to profit a worn-out old roue." (Women of Medieval France) 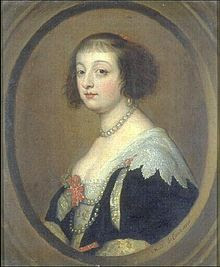 Béatrice de Cusance
Princesse de Cantecroix
1) Béatrice de Cusance, Princesse de Cantecroix (1614-1663)
French courtier & royal mistress.
Lover in 1634-1642.
" . . . Left a young, beautiful, and childless widow (1637), Beatrix became the mistress of Charles IV, duke of Lorraine (1604-1675), whose wife had retired from the court of Nancy. He persuaded Beatrix to through a form of bigamous marriage with him (1637) and requested an annulment of his childless marriage from Pope Urban VIII, but refused to leave Beatrix during the period pending judgement on the case. The couple separated after the birth of their son (1642), and Beatrix retired to the court of The Hague, in Holland. . . Returning to the court of Lorraine, the duke renewed his former attachment to Beatrix, and married her a second time a few days before her death at Nancy (June 5, 1663).  Madame de Cantecroix left two children by Duke Charles, who were not regarded as legitimate, Anne de Lorraine (1639-1720) who married Francois de Lorraine, Prince de Lillebonne and was prominent at the court of Louis XIV, and Charles Henry de Lorraine, Comte de Vaudemont (1642-1773)" (A Bit of History)
Beatrice de Cusance's other lover was:
Charles Stuart.
Lover in 1659.
" . . . There (in Holland) she pursued a scandalous affair with the much younger Charles Stuart (II) (1659), which liaison was responsible for the breaking of his betrothal to Louisa Henrietta of Orange. . . ." (A Bit of History)

2) Catherine de Saint-Remy.
Natural offspring:
a. Karl Johann Lothar von Vequel (1633-1732), mar 1698 Anna Elisabeth von Lindenberg (1679-1749)
3) Isabelle de Ludres (1647-1726)
Leopold I de Lorraine
(1679-1729)
Duc de Lorraine
Duc de Bar
1690-1729
Duke of Teschen
1722-1729.
Son of Charles V de Lorraine & Eleonore von Osterreich
Husband of Elisabeth-Charlotte d'Orleans
His lover was:
Anne-Marguerite de Ligneville (1707-1798)
Princesse de Beauvau-Craon
Lover in 1706
Daughter of Marc de Beauvau, Prince of Craon, and Anne Marguerite de Ligniville
Wife of:
1. Jacques Henri of Lorraine, Prince of Lixheim (d. 1734), mar 1721
2. Gaston Pierre Charles de Lévis, Marshal de Mirepoix (d. 1757), mar 1739.
"The princess Craon was the favourite mistress of Leopold the last duke of Lorraine, who married her to monsieur de Beauvau, and prevailed on the emperor to make him a prince of the empire.  They at this time resided at Florence, where prince Craon was at the head of the council of regency." (Walpole, Vol. 1: 72)
"Leopold's marital life was troubled in 1706, when he took Anne-Marguerite de Lignéville, Princess of Beauvau-Craon as his mistress, and enriched her family. Elisabeth Charlotte however, following her mother's advice, remained silent." (Wikipedia)
". . . Herr Wolfling is the eldest son of the late Grand Duke of Tuscany Ferdinand IV, cousin of the ill-fated Emperor Franz Joseph.  From his ear . . .(???)
at July 02, 2020 No comments: